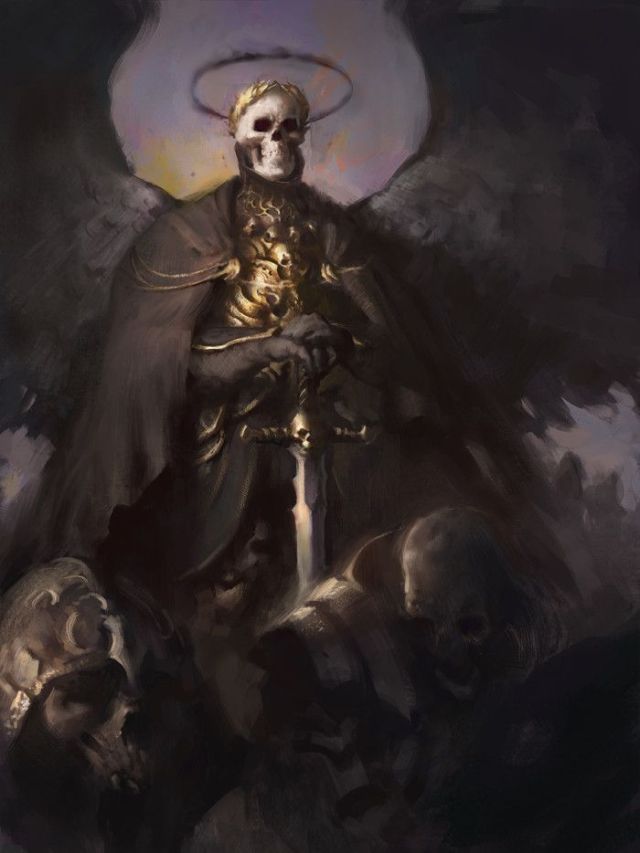 What does this picture say to you? I found it here as part of a run of undead-themed images, all labeled “Tomb King,” but this was at the top. And I’m glad it was; the rest of the series is a collection of moldering pharaohs and relatively run-of-the-mill skeletal warriors. If I had seen one of those first – especially the Egyptianish ones – I probably would have parsed the whole thing differently and overlooked whatever it is that caught my eye about this image in particular.

What did catch my eye? Is it the halo, carefully centered in its own bit of negative space? Something about the expression on the skull’s face? Or just the fact that even with the armor and wings and all, this guy has incredible posture? Whatever it was, my first thought was that despite the black, the ornate armor, and the skeleton heads, this isn’t a bad guy.

The standard fantasy trope for skeletons is that they’re bad, or at best mindless combat opponents. In either case, something to be killed. …Re-killed. Broken into pieces. Stopped. Something along those lines. Antihero or even sympathetic treatments have been given to intelligent undead like vampires or ghosts; even to zombies. But not skeletons. You can see where I’m going with this.

What if there were a community of skeletal people somewhere? Just hanging out, playing board games, pondering the meaning of life, trying to find dresses that make them look fat. Neither inherently evil nor automatically hostile to outsiders – although, understandably, wary – and with interests on both the individual and group levels that go beyond merely guarding the tombs they were interred in against intrusion.

From Three Word Phrase – for a weird bonus, see this one too.

You could have an isolated skeleton community somewhere to be traded and otherwise interacted with, like any other little town or camp in the game world: an abandoned graveyard or mausoleum, for example. Or they could be integrated into a larger, more cosmopolitan, community, such as a skeleton ghetto in a metropolis or a skeleton faction in a megadungeon.

There’s a lot you can do with this. The Tomb King can be a wise and just ruler, doing his best to protect his people, or a dangerous and petty tyrant the other skeletons want to overthrow. Skeletons can give the party quests or aid. PCs who make friends or enemies among the skeletons can find this helping or hindering them in some catacomb miles away or a different level of the dungeon. They could be given skeleton-specific magic, tools, or information.

Skeletons are going to have different priorities than living things do. They have different needs and wants, advantages and disadvantages. They have different rewards to offer to those who aid them, and different strategies for dealing with threats. And most of all, they have a different perspective on “life” – or on existence, rather. All in all, it seems like a good opportunity to add a faction to the play area that isn’t just another demihuman or beast-man race.

I love the written word more than anything else I've had the chance to work with. I'm back in the States from Japan for grad school, but still studying Japanese with the hope of becoming a translator -- or writer, or even teacher -- as long as it's something language-related.
View all posts by Confanity →
This entry was posted in Miscellaneous, World-Building and tagged skeletons, Tomb King. Bookmark the permalink.

1 Response to The Tomb King’s People