From out of the mouth of me, I grab at thee

To want something very, very much; so much that you can hardly stand it. This imaginative metaphor compares desire to physical appetite, and pictures a hunger so powerful that a grasping hand comes out of the person’s throat to seize its object and pull it back. You know, like that weird second mouth inside the alien’s mouth in Alien. Except a hand, not a mouth. Um. 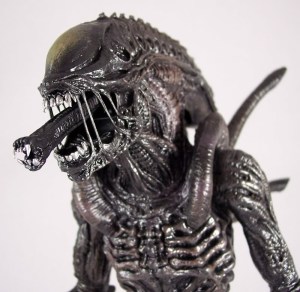 Look at that face! Doesn’t it just scream “want” to you?

喉 (nodo) is “throat” and から (kara) is a particle roughly equivalent to the English “from,” meaning the first two words of the phrase actually mark the location of the action. The actual subject of the sentence comes next: 手 (te, “hand”), followed by the subject-marker particle が (ga) and then the verb 出る (deru, “to come out”).

Although the expression can technically function as a complete stand-alone sentence, it will generally be part of a longer one, followed by terms like ように (you ni, “as if”) or ほど (hodo, “to the degree/extent”). のど can also be written with the kanji 咽, although this is rarer – an alternate character that was only recently reintroduced to the standard set.

[“I want that game more than I can bear, so I have to get a part-time job and make some money.”]

I love the written word more than anything else I've had the chance to work with. I'm back in the States from Japan for grad school, but still studying Japanese with the hope of becoming a translator -- or writer, or even teacher -- as long as it's something language-related.
View all posts by Confanity →
This entry was posted in Japanese, Kotowaza and tagged alien, desire, Japanese, want, 喉, 手が出る. Bookmark the permalink.

1 Response to From out of the mouth of me, I grab at thee