But do you *have* to be on a horse for it to count?

Alternately: Mighty. So strong that a thousand opponents still cannot match them.

Notes: This can be expanded to the descriptive noun phrase 一騎当千の兵 (ikkitousen no tsuwamono), “a warrior who can defeat a thousand.” This is actually a pretty old one but native to Japan, first attested in the 14th-century epic Taiheiki. 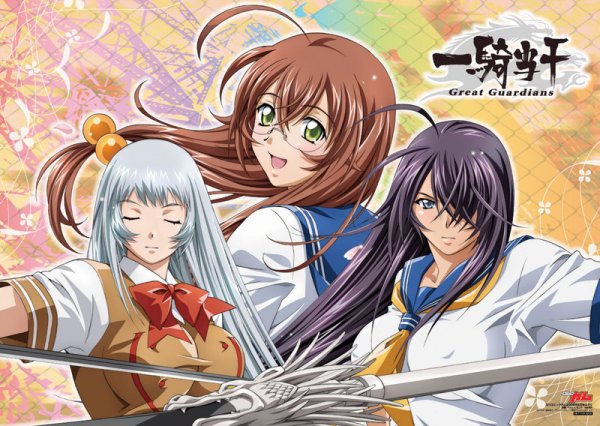 Also the name of a manga and anime series! “Based on” the Romance of the Three Kingdoms! Actually about nearly-naked schoolgirls (and less-naked guys) beating each other up! You would not believe how long it took to find an image clean enough to illustrate it with! Source!

I love the written word more than anything else I've had the chance to work with. I'm back in the States from Japan for grad school, but still studying Japanese with the hope of becoming a translator -- or writer, or even teacher -- as long as it's something language-related.
View all posts by Confanity →
This entry was posted in Japanese, Yojijukugo and tagged mighty warrior, Romance of the Three Kingdoms, Taiheiki, 当千, 一騎. Bookmark the permalink.