The gods help those who don’t bug them?

This one is dedicated to all those who just had to push the big red button. Incidentally, it’s somewhat antonymical to last week’s kotowaza.

If it ain’t broke, don’t fix it. It’s best not to get involved. Let sleeping dogs lie. If you simply leave well enough alone, you’ll be able to avoid a lot of trouble.

First we find the verb 触る (sawaru), “to touch.” Here it’s in the imperfective form to take the negative auxiliary verb ず (zu), itself in prenominal form. To be honest, I was confused about this for a while – I was expecting a conditional, and was ready to translate the expression as “If you don’t touch [it], the gods won’t curse you.” But that would have been wrong: the prenominal indicates that the negated verb modifies the following noun, giving us “untouched gods”! Thank goodness for grammar, eh?

Next we have 神 (kami), “spirit” or “god.” The particle に (ni) marks it, in this case with its directional function to indicate “from.” This is followed by another noun, 祟り (tatari), from the verb 祟る (tataru), “to curse,” “to haunt,” “to cause a bad outcome.” And finally we get the adjective of negation 無し (nashi) in sentence-final form.

This is the sa entry of the Osaka Iroha karuta set.

[“Do you want to get yourself killed? Don’t they say to let sleeping dogs lie?” “In any case they’re awake now. There’s no helping it. So won’t you please help?”] 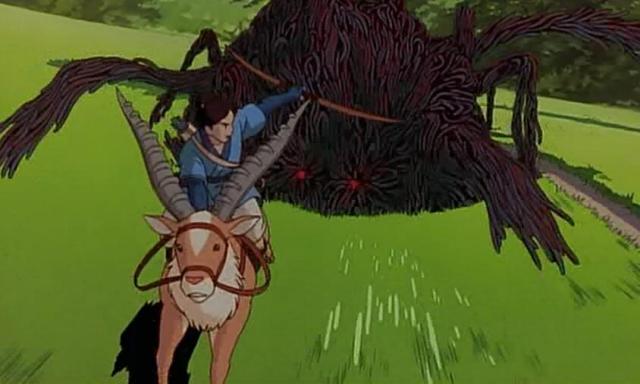 Come on, Ashitaka, what was I JUST talking about? [Source]

I love the written word more than anything else I've had the chance to work with. I'm back in the States from Japan for grad school, but still studying Japanese with the hope of becoming a translator -- or writer, or even teacher -- as long as it's something language-related.
View all posts by Confanity →
This entry was posted in Japanese, Kotowaza and tagged curse, 神, 祟り, 触らぬ, Princess Mononoke, sleeping dogs, tatarigami. Bookmark the permalink.

2 Responses to The gods help those who don’t bug them?