Is this where I snark about Apple products?

Alternately: A lack of truth in advertising. Advertising something better than what you’re actually selling. Something seems high-quality, but its actual nature or essence is substandard.

Notes: This is another phrase from ancient China, where apparently meat-sellers would advertise that they had mutton by posting an actual sheep’s actual head (as proof that they had in fact slaughtered a sheep – it’s unclear how old such an advertisement was allowed to get before it had to be thrown out!). Some unscrupulous merchants, unfortunately, would sell cheaper alternatives such as dog meat.

The four-character compound was derived from the more complete phrase, 羊頭を懸げて狗肉を売る (Youtou wo kakagete kuniku wo uru), “Hanging (up) a sheep’s head and selling dog meat.”

Note that the character for “dog” used here, 狗, is different from the contemporary standard 犬. 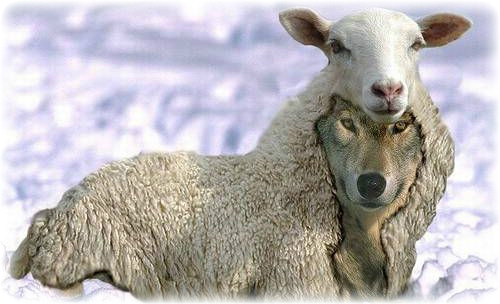 A literal rendition borrowed from this Korean website (which I can’t read at all).

I love the written word more than anything else I've had the chance to work with. I'm back in the States from Japan for grad school, but still studying Japanese with the hope of becoming a translator -- or writer, or even teacher -- as long as it's something language-related.
View all posts by Confanity →
This entry was posted in Japanese, Yojijukugo and tagged ancient Chinese culture, 狗肉, 羊頭, dog meat, sheep head, truth in advertising. Bookmark the permalink.