Alternately: Like it says: spring, summer, fall, and winter. All four seasons. A full year.

Notes: This one is very old, attested since at least the early 900s, and has been used a number of times in connection with poetry.

You may recall from a couple of weeks ago (last year!) when I mentioned that the Japanese year used to begin in the spring. Unlike contemporary Western calendar years, which roll over somewhat arbitrarily in early winter, for a long time the Japanese new year (cribbed off of the Chinese new year) occurred in what we think of as February or so, at the start of what was officially considered spring for various official and aesthetic purposes.

Japanese people will often, with little provocation, tell you somewhat emphatically that “Japan has four seasons,” as if the rest of the world didn’t. It’s easy, when you’re from a temperate enough climate to also have four seasons, to be nonplussed or amused or offended. I suppose, to cast a positive light on the custom, it’s worth taking as a reminder that even though different cultures from all around the world share the “four seasons” concept, that the details and meaning of those seasons – the cultural packaging, if you will – varies. “Spring” for the Shining Genji began about a month earlier than it does for me, and the way he celebrated it was vastly different from my own mild attention. Even modern Japanese 大掃除 (oosouji), “big cleaning,” is different from the equivalent Western concept of “spring cleaning.” Just something to keep in mind to guard against false equivalence, I guess. 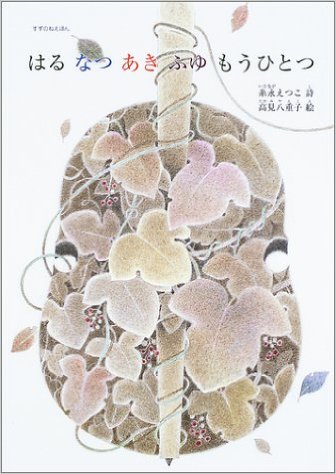 Here’s a contemporary example of a poetry collection that references this compound, albeit with Japanese rather than Chinese readings of the characters.

I love the written word more than anything else I've had the chance to work with. I'm back in the States from Japan for grad school, but still studying Japanese with the hope of becoming a translator -- or writer, or even teacher -- as long as it's something language-related.
View all posts by Confanity →
This entry was posted in Japanese, Yojijukugo and tagged 秋, four seasons, New Year, 冬, 四季, 夏, 春. Bookmark the permalink.