So the most ominous forest these days is Wall Street?

Alternately: Various malevolent spirits (aka bakemono, 化け物, or mononoke, 物の怪) of the mountains and rivers, born of the “miasma” found in such places. By metaphorical extension, the phrase also describes a group of people who do bad things to serve their own greed.

Notes: These characters are all pretty rare; the only one even remotely close to common is 魅, which is included in the daily-use (常用) set literate adults are expected to know. In fact, it’s kind of hard to even pin down the “meanings” of the characters precisely without in-depth research, because apparently they (and this compound) go back thousands of years to ancient China. Again.

Specifically, my sources trace its lineage to the Commentary of Zuo, a sort of midrash on an even older text called the Spring and Autumn Annals.

That said, while at a distance this yojijukugo may look like a mass of tiny lines, closer inspection reveals that each is based on the “demon” radical (鬼), wrapped around the left and bottom, and that the remaining component is often phonetic – so 魍 shares a pronunciation with 網, “net,” and 魅 with 未, often a prefix meaning “not yet.” 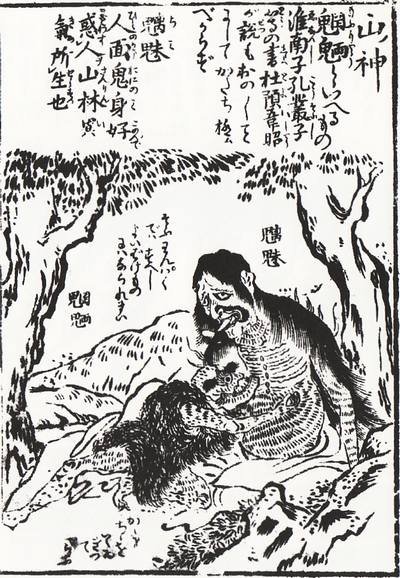 These guys! Art by Edo Iseya Jisuke, borrowed from the Wikimedia Commons.

I love the written word more than anything else I've had the chance to work with. I'm back in the States from Japan for grad school, but still studying Japanese with the hope of becoming a translator -- or writer, or even teacher -- as long as it's something language-related.
View all posts by Confanity →
This entry was posted in Japanese, Yojijukugo and tagged bad guys, bakemono, Commentary of Zuo, 魍魎, 魑魅, malevolent spiriits, mononoke, Spring and Autumn Annals. Bookmark the permalink.

3 Responses to So the most ominous forest these days is Wall Street?