(A sharp-eyed reader has alerted me that yesterday’s yojijukugo is a repeat from last August! This is pretty embarrassing, but it also gives us an interesting glimpse into my writing process through the similarities and differences between the two posts. I’ll leave it be, then, and simply add a new one today to officially fill the te slot in our journey through the syllabary.)

Notes: Both 手練 and 手管 refer to methods of trickery, so this is one of those 四字熟語 formed through doubling or repetition. Supposedly, the phrase originally described the various ways “pleasure women” manipulated their customers in order to maintain a high income. While this may suggest a literal reading of the characters, the “doubling” nature of the compound tells us that that path leads to folk etymologies, so we’ll say no more about it. 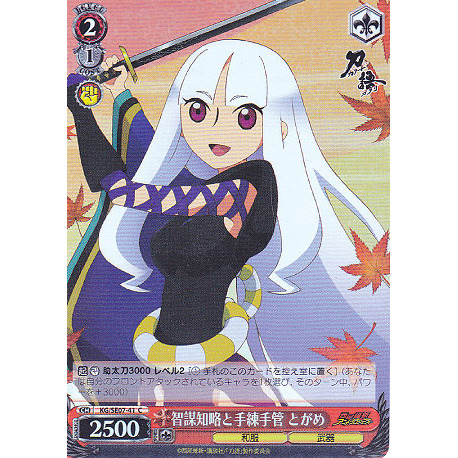 Togame, a character who fits the “manipulator” role in a surprising way. From the light novel series Katanagatari, which was later adapted into an anime… and a card game?

I love the written word more than anything else I've had the chance to work with. I'm back in the States from Japan for grad school, but still studying Japanese with the hope of becoming a translator -- or writer, or even teacher -- as long as it's something language-related.
View all posts by Confanity →
This entry was posted in Japanese, Meta, Yojijukugo and tagged error correction, Katanagatari, manipulation, trickery, 手管, 手練. Bookmark the permalink.