Magic Monday – Literally above the law

A Miniature Judgment is a set of figurines dressed as clan elders from a long-passed age, carved of dark, highly-polished wood. If arranged on an appropriate dais, altar, or other foundation, they have the ability to impose a society’s laws and customs upon all present. For this to work, the foundation upon which they stand must contain those laws in some way – often through placing scrolls, books, or tablets in a hollow space; less commonly by simply writing on the surface. The effects they can impose depend in part on how many members of the Judgment are present. Note that a Judgment is an objective but morally and ethically neutral arbiter of whatever text it is given to enforce.

There are many sets of Miniature Judgment figures, of varying make and number. They are based on The Judgment, a circle of larger-than-life marble figures on a tel in Hollin. Originally there were twenty figures in the Judgment, although two have been destroyed over the years. A heavily-armed priesthood occupies the underground complex dug into the tel and presumably guards a copy of Hollin’s laws therein. 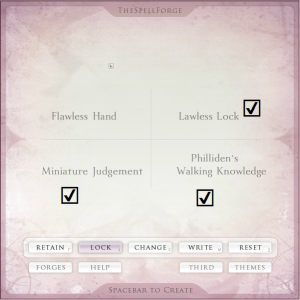 I love the written word more than anything else I've had the chance to work with. I'm back in the States from Japan for grad school, but still studying Japanese with the hope of becoming a translator -- or writer, or even teacher -- as long as it's something language-related.
View all posts by Confanity →
This entry was posted in Rules, Setting, World-Building and tagged item, Judgment, law, Magic Monday, statues. Bookmark the permalink.