One, two, three, four five; Once I caught a fish alive

We begin four characters in with the particle に (ni) in its location-marker function. The location is 下 (shita), “below,” with the associative particle の (no) telling us that it’s the space below 柳 (yanagi), a willow tree. This section is followed by the frequency adverb いつも (itsumo), “always.” Finally we get the topic of discussion (as marked by topic-marker particle は, wa) with the noun 泥鰌 (dojou) – a “loach,” a kind of freshwater fish related to carp and catfish. And finally, at the very end, we get a verb: 居る (oru or iru), “[for a living thing] to be (in a place).” The verb is in the imperfective case with negative suffix ぬ (nu). (This is one of those cases where classical grammar would probably give us sentence-final ず (zu).)

I deliberately went with the longest, oldest-fashioned version of the phrase available. Acceptable variants include writing いつも as 何時も, 泥鰌 as どじょう, and 居らぬ as おらぬ or even the more modern 居ない/いない. The いつもmay also be brought to the beginning, or the entire phrase may be referenced in condensed form as the noun phrase 柳の下の泥鰌.

However, replacing は with が, or placing the いつも at the start of the phrase, will alter the meaning. Therefore both of these are considered errors.

The どじょう is a once-common fish in Japanese streams, traditionally used as food, but not especially familiar to Americans. (Does the word “loach” actually invoke an image of a fish in your head? It didn’t for me!) For a bit of cultural context, then, here are some loach: 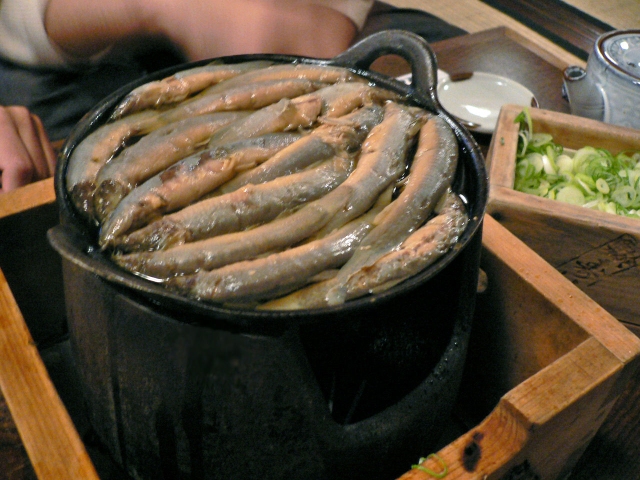 Photo from the wikimedia commons, by “hirotomo t.”

[“Yui-chan? Ah, see, I guess in the middle of June she saw a really cool guy in some random cafe. So ever since she’s been trying to get lightning to strike twice by going back to the same cafe over and over, but she hasn’t seen him since. And now she’s depressed about it, the poor girl.”]

I love the written word more than anything else I've had the chance to work with. I'm back in the States from Japan for grad school, but still studying Japanese with the hope of becoming a translator -- or writer, or even teacher -- as long as it's something language-related.
View all posts by Confanity →
This entry was posted in Japanese, Kotowaza and tagged ドジョウ, coincidence, expectations, loach, willow, 柳の下, 泥鰌. Bookmark the permalink.

1 Response to One, two, three, four five; Once I caught a fish alive