Limited numbers of them, though

Alternately: Being fooled by the promise of profit or advantage into missing the fact that a difference or change is superficial only. Greed leading someone into failing to realize that a new situation or proposal is functionally identical to an old one.

Notes: This comes from a story from the Spring and Autumn period in China. There was a man who made a living training monkeys, but he fell on hard times and had to reduce their food ration. He told them that they could only have three nuts in the morning and four in the evening (sources differ on whether these were acorns or chestnuts). When the monkeys objected, he switched it to four in the morning and three in the evening. The monkeys were mollified by the morning number increasing, and assented. The yojijukugo is traced back to two texts, the Zhuangzi and the Liezi.

I’m not sure if there’s a related saying in Chinese or Japanese to describe a situation where, for example, one political party blames a loss of manufacturing jobs on “foreigners” and promises to restore them through xenophobic and isolationist policies, knowing full well that the jobs were lost to automation and can’t be replaced. The essence of 朝三暮四 is that the result of two different policies are identical, but in this case, the xenophobic party is objectively more harmful to everyone, including the fools who support them.

This compound may also take the second-offer form of 朝四暮三 or the flipped form of 暮四朝三. 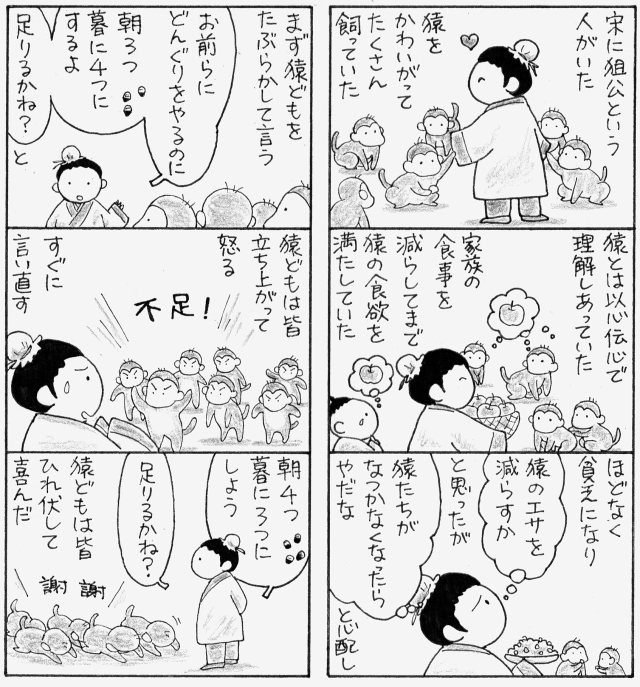 A comic dramatizing the story, from this blog. The creator apparently specializes in illustrating classic texts for high school students.

I love the written word more than anything else I've had the chance to work with. I'm back in the States from Japan for grad school, but still studying Japanese with the hope of becoming a translator -- or writer, or even teacher -- as long as it's something language-related.
View all posts by Confanity →
This entry was posted in Japanese, Yojijukugo and tagged fools, monkeys, short-sighted profit interest, Spring and Autumn period, 暮四, 朝三. Bookmark the permalink.

1 Response to Nuts to you