The law of cause and fruit

Continuing the theme from Sunday’s kotowaza….

Alternately: The law of karma. What goes around comes around. What returns to you is good or ill depending on whether your actions are for good or for ill. Originally a Buddhist phrase that promised reward or retribution for one’s actions in both one’s immediate past and in one’s past lives. In modern usage, this compound most often refers to the consequences of evil or harmful actions.

This compound apparently comes to us from a text called 大慈恩寺三蔵法師伝 (Daijionji sanzouhoushi den), a record of the life of the Chinese Buddhist monk Xuanzang, whose trip to India in the early to mid 7th Century CE provided the basis for the Journey to the West, one of the “four great novels” of classical Chinese literature. More recently, it comes to us via the late 8th or early 9th Century Japanese collection of Buddhist stories known as the Nihon Ryouiki. 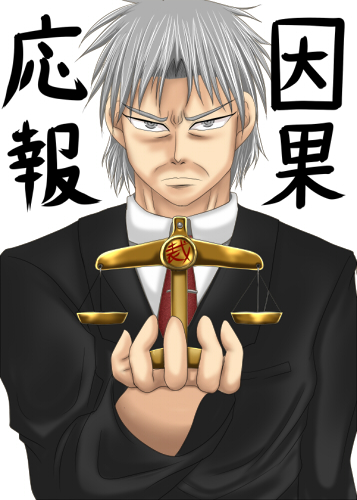 It’s a manga! About judgment! Apparently!

I love the written word more than anything else I've had the chance to work with. I'm back in the States from Japan for grad school, but still studying Japanese with the hope of becoming a translator -- or writer, or even teacher -- as long as it's something language-related.
View all posts by Confanity →
This entry was posted in Japanese, Yojijukugo and tagged Buddhism, Journey to the West, karma, Nihon Ryoiki, what goes around comes around, Xuanzang, 因果, 応報. Bookmark the permalink.

3 Responses to The law of cause and fruit