Later someone invented a system of eight directions.

Alternately: Completely alone and cut off, surrounded by enemies. Having foes in all (four cardinal) directions. Feeling forsaken and betrayed.

Notes: This thoroughly historical compound comes to use from the Records of the Grand Historian, in the chapter on Xiang Yu, a warlord who was eventually defeated by the first emperor of the Han dynasty. The story goes that the Han forces constantly harassed and ambushed the Chu, and at night attacked them psychologically by forcing captured Chu soldiers to sing the songs of their homeland. Thinking that their own country had been overrun while they were campaigning in enemy territory, many of Xiang Yu’s army deserted. In the end he and his dwindling force were hunted down and defeated. Xiang Yu himself is said to have committed suicide. 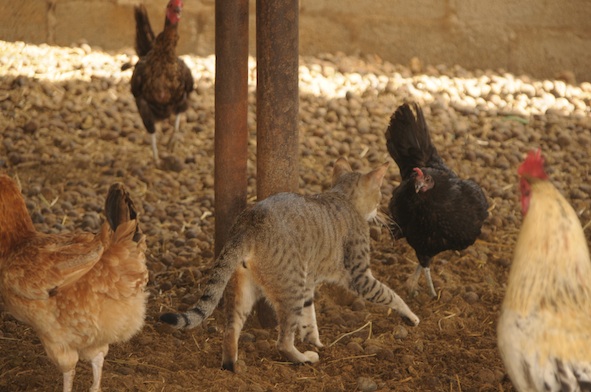 With the twist that the cat suspects that a couple of the chickens used to be cats but changed sides… because they’re meowing.

I love the written word more than anything else I've had the chance to work with. I'm back in the States from Japan for grad school, but still studying Japanese with the hope of becoming a translator -- or writer, or even teacher -- as long as it's something language-related.
View all posts by Confanity →
This entry was posted in Japanese, Yojijukugo and tagged alone, cat versus chickens, 項羽, forsaken, Records of the Grand Historian, surrounded, Xiang Yu, 史記, 四面, 楚歌. Bookmark the permalink.