If you’re a lefty, do you substitute in 右?

左団扇で暮らす
(Hidari uchiwa de kurasu; “Living with a fan in your left hand”)

Living a life of ease and relaxation. A lifestyle without stress or worry. The image invoked is of an aristocrat lounging around, no work to do beyond idly fanning themselves with a fan in the off-hand. For some reason, the fan being in the left hand for idle fanning seems to be an important element. (Perhaps if you want to seriously cool off, you use the dominant hand?)

This brief idiom is nonetheless a complete sentence. Our noun is 団扇 (uchiwa) – a round, stiff fan of a design that any Naruto fan (ha ha) should find instantly familiar. This is modified by 左 (hidari), a noun meaning “left,” shorthand for “held in the left hand.” The particle で (de) indicates that the noun is the means by which the verb is performed, and the verb is 暮らす (kurasu), “to live,” “to spend time,” in sentence-final form. 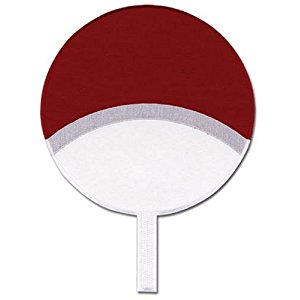 Yup, the うちは (Uchiha) clan is literally the “fan clan.”

In addition to invoking the image of idle aristocrats, this phrase carries connotations of a style of retirement, of taking things easy after (presumably) a life of satisfying accomplishments.

This phrase may be condensed down to the noun phrase 左団扇 to signify “ease and comfort.” The predicate may also be replaced with を使う (wo tsukau), “to use,” or 団扇 may be replaced with 扇 (ougi), a folding fan.

[“When I was a little kid I wanted to live a life of ease, but as I got older I started longing for a life of both outdoor work and study. Funny, right?”]

I love the written word more than anything else I've had the chance to work with. I'm back in the States from Japan for grad school, but still studying Japanese with the hope of becoming a translator -- or writer, or even teacher -- as long as it's something language-related.
View all posts by Confanity →
This entry was posted in Japanese, Kotowaza and tagged fan, good life, left hand, life of ease, Naruto, retirement, 左団扇, 暮らす. Bookmark the permalink.