Sorry about all the words

Alternately: This is a polite, formulaic phrase to use at the close of a letter, apologizing to the recipient for being overlong, going too far with its content, or anything else that might have inadvertently given offense.

Notes: Commentary on this compound suggests a special ire for people who actually put harsh or offensive language in a message and then slap this phrase on the end like a useless band-aid… but I’m sure we can all think of that one guy who would happily fill a letter with insults without any appearance of awareness that he had done anything wrong. That’s the sort of jerk who makes you long for people who know and care enough to at least pretend not to be trying to be nasty. 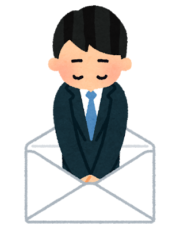 I love the written word more than anything else I've had the chance to work with. I'm back in the States from Japan for grad school, but still studying Japanese with the hope of becoming a translator -- or writer, or even teacher -- as long as it's something language-related.
View all posts by Confanity →
This entry was posted in Japanese, Yojijukugo and tagged apology, epistolary, formula, letter, 多罪, 手紙, 暴言. Bookmark the permalink.