Alternately: One’s own profit; one’s own greed. The self-centered attitude or behavior of someone who is motivated by avarice over all else.

Notes: 欲 may also be written in its alternate form of 慾 (note that the former is just the latter with 心 removed) without any change in meaning or pronunciation; in another variant, the initial 私 may be replaced with 我 (ga, also “me”).

There’s a Buddhist tale about a man who visited a hell and a paradise, and at each he observed a table set with a mouth-watering feast… and meter-long chopsticks.

In the hell (地獄), the near-skeletal denizens who sat at the table fell prey to their selfishness and greed, desperately trying and failing to grab the best food and eat it with a tool that made doing so impossible. Eventually the meal broke down entirely in bickering and everyone remained hungry.

In the paradise (極楽), everyone who sat at the table simply fed the people across from themselves, and were fed by those people in turn. The meal ended with everyone satisfied and happy in a warm glow of camaraderie. 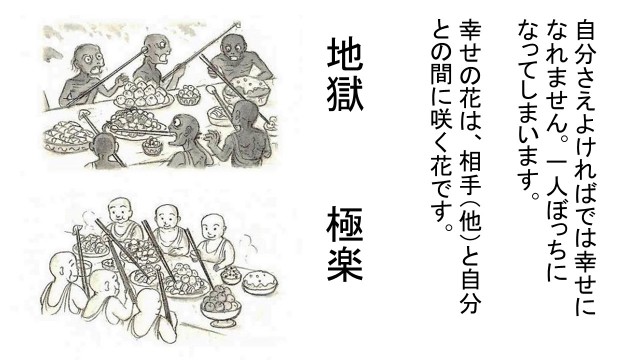 A picture of that story, from this Buddhist dictionary.

I love the written word more than anything else I've had the chance to work with. I'm back in the States from Japan for grad school, but still studying Japanese with the hope of becoming a translator -- or writer, or even teacher -- as long as it's something language-related.
View all posts by Confanity →
This entry was posted in Japanese, Yojijukugo and tagged Buddhism, commercialism, 私利, 私慾, 私欲, greed, selfishness, 我利. Bookmark the permalink.