And the leaves that are green

…seem to be green again the next year… but we are not leaves.

Alternately: Every single year. Year in and year out.

Notes: As always, the second instance of each character may be replaced with the kanji doubling mark 々. Also, somewhat less commonly, the order of the elements may be flipped to give 歳歳年年 (with or without doubling marks), sai sai nen nen.

This compound comes to us from a poem by Liu Xiyi (劉希夷, Japanese Ryuu Ki’i) a mid-600s CE Chinese poet. The piece, known as 「代悲白頭翁」(Japanese pronunciation “Daihi hakutouou”), laments that 年年歳歳, the flowers bloom as always – but 歳歳年年, the people who come to see them bloom are different, because old age comes for us all. 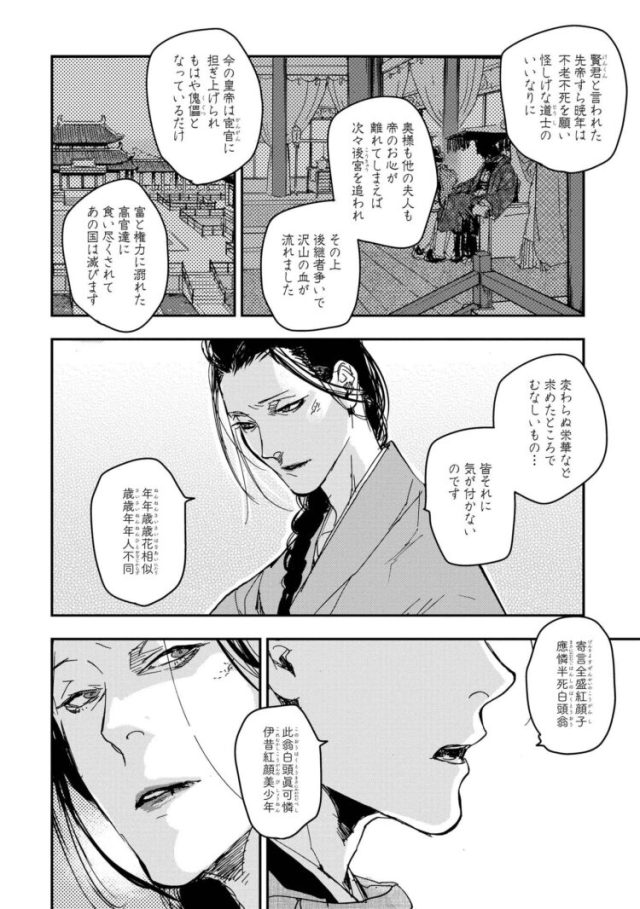 Here quoted in 『応天の門』(Outen no mon), an obscure manga about early-Heian court politics

I love the written word more than anything else I've had the chance to work with. I'm back in the States from Japan for grad school, but still studying Japanese with the hope of becoming a translator -- or writer, or even teacher -- as long as it's something language-related.
View all posts by Confanity →
This entry was posted in Japanese, Yojijukugo and tagged annual, Chinese literature, New Year, yearly, 年々, 年年, 歳々, 歳歳. Bookmark the permalink.