Just don’t be a Zax about it

Alternately: A golden rule. (Not necessarily The Golden Rule, though.) An important, even foundational principle, for someone’s behavior and life.

Notes: This yojijukugo uses repetition for emphasis: both 金 and 玉 refer to “something of high value,” while 科 and 条 indicate “rules.”

It comes to us from an old acquaintance, the Wen Xuan aka Selections of Refined Literature (Japanese 『文選』 = Monzen) – a 2500+ year old anthology of Chinese poetry and literature. 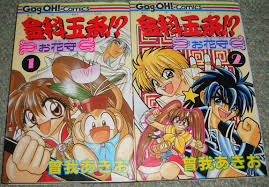 A short-lived 1996 comic aimed at boys; these two volumes seem to comprise the entire series.

I love the written word more than anything else I've had the chance to work with. I'm back in the States from Japan for grad school, but still studying Japanese with the hope of becoming a translator -- or writer, or even teacher -- as long as it's something language-related.
View all posts by Confanity →
This entry was posted in Japanese, Yojijukugo and tagged Dr. Seuss, 金科玉条！？お花守, golden rule, principles, rules, Selections of Refined Literature, Wen Xuan, 文選. Bookmark the permalink.