A life spent just hanging around?

Alternately: Putting maximum effort into something. Striving as hard as you can; putting your very life on the line.

Notes: The original form of this phrase used 所 (sho – note the short vowel), “place,” rather than 生. This form has almost identical pronunciation and meaning, although the 一所 carries connotations of someone (such as a samurai) staking their life on the maintenance and defense of the domain they had been placed in by their lord; that territory might be called 一所懸命の土地 (isshoukenmei no tochi), where tochi is “land,” or “place.”

The version that uses 生 spread and eventually became more common in the modern era after the feudal system was abolished, travel became free and widespread, internal warfare died out, and 一所 was rendered largely irrelevant to the Japanese lifestyle. One may still find the 一所 version here and there; the main issue is to pronounce each version with the correct vowel length.

This is such a common phrase that I was shocked to discover that I don’t seem to have done a post on it yet! Well, better late than never. 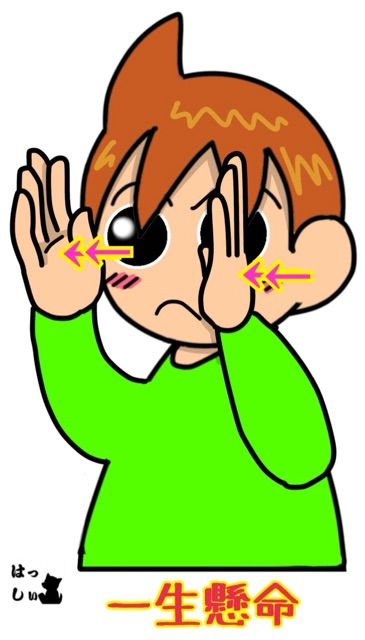 The Japanese sign language sign for 一生懸命, from this site. My daughter saw this image and declared that it was a picture of her, so I am required to use it in this post.

I love the written word more than anything else I've had the chance to work with. I'm back in the States from Japan for grad school, but still studying Japanese with the hope of becoming a translator -- or writer, or even teacher -- as long as it's something language-related.
View all posts by Confanity →
This entry was posted in Japanese, Yojijukugo and tagged hard work, life at stake, semantic evolution, utmost, 懸命, 一生, 一所. Bookmark the permalink.