Brood X certainly has wings, and they fly like they’re drunk, but I wouldn’t call them immortal.

Alternately: Feeling as if one has grown wings and ascended into the skies… often as a result of alcohol. Tipsy, or buzzed, whether from some felicitous life event… or just drink.

This is a fanciful compound of compounds. 羽化 is literally the growing of wings, but can also refer to an insect molting into its (winged) adult form from a nymph or pupa. 登仙 is “ascending” to the status of a Taoist-style “immortal” or “hermit” – a holy person (human or non-) associated with certain spiritual practices and supernatural abilities.

This phrase comes to us from our friend Su Shi (蘇軾, Japanese So Shoku), again via the “Former Ode on the Red Cliffs” (前赤壁賦, Japanese Zen sekiheki no fu). 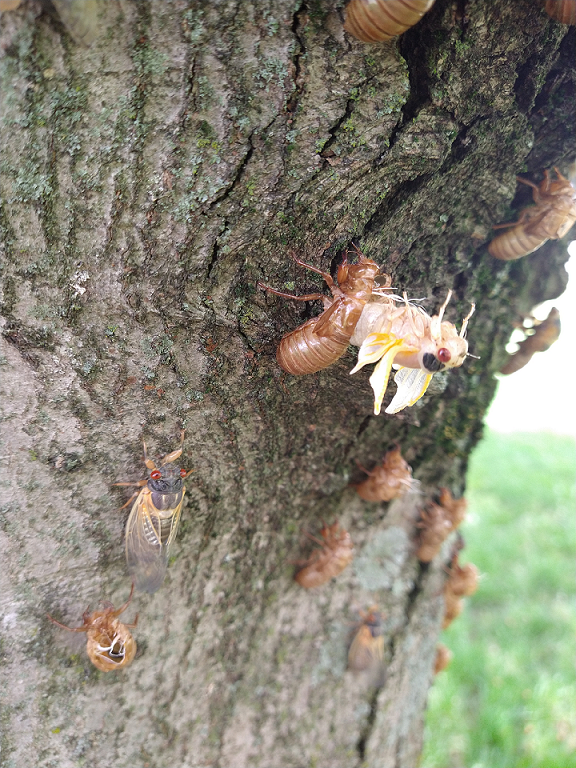 Brood X cicadas before, during, and after molting / 羽化

I love the written word more than anything else I've had the chance to work with. I'm back in the States from Japan for grad school, but still studying Japanese with the hope of becoming a translator -- or writer, or even teacher -- as long as it's something language-related.
View all posts by Confanity →
This entry was posted in Japanese, Yojijukugo and tagged brood X cicadas, 登仙, 羽化, drunk, eclosion, 苏轼, 蘇軾, soaring feeling, Su Shi, 前赤壁賦. Bookmark the permalink.

1 Response to Belly full of sap, head full of sky