If you’re looking for random fantasy terms, whatever your purpose, there’s worse you could do than “The Forge.” 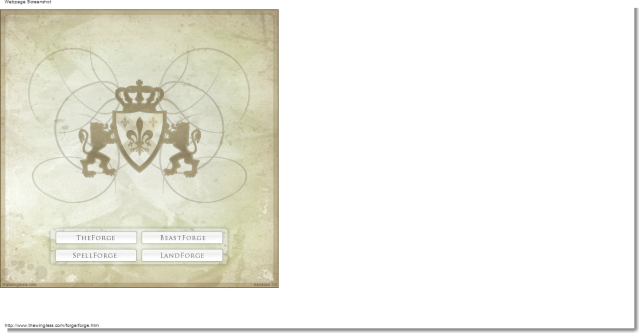 As you can see, some random phrases pop up at the very start.

There are four “generators”: one for creatures, one for locations, one for magical-sounding stuff, and one that’s sort of all-purpose. Choose one, and it’ll take you to this kind of window.

At this point instead of painstakingly explaining the whole tool, I’ll just point out that there’s a Help button; clicking it gives you explanatory text when you hover over anything in the box. Choosing any of the Forges will automatically generate four names, as you can see, so after this it’s just a matter of fiddling around or refreshing until something comes up that inspires you.

While I was going over the site for screenshots, this set came up without any tweaking.

It caught my fancy, so here’s my interpretation, just as an example for how this works, clockwise from the top right.

A Foul Gem is a dwarf’s assassination tool. It’s widely known that certain kinds of stones have magical properties that affect the body, and can be used in various ways – worn against the skin, inserted into the skin, fashioned into a dish or utensil so that it touches what you eat or drink, or even swallowed – to protect against poison, disease, and other ills. A Foul Gem is a crystal hand-grown and -crafted to mimic, as closely as possible, a beneficial stone, but with more sinister effect. Exceptionally well-made ones will even incorporate some minor protection or benefit in order to conceal their main effect, which is to poison the user’s body or mind and eventually destroy them.

Ash Creep is a wizard’s death-curse. It starts slowly, with fires around the afflicted giving off slightly more smoke and ash than normal. Soon dust and soot begin accumulating around them even without open fire – first in unused spaces, then on any open surface, and soon everywhere, with horrifying speed. In later stages, the afflicted may go to sleep in a sterile, hermetically-sealed box and still wake up in a pile of ash. Unless the curse can be lifted in time, Ash Creep is messily fatal.

Deep Root is a legendary tuber, found only deep underground in volcanic caverns, apparently living off of geothermal energy in place of sunlight. Although not especially tasty or nutritious, they are highly sought after due to being rare, impossible to cultivate, and completely unaffected by heat, which makes them useful in a variety of magical concoctions. Salamanders and other beings affiliated with fire also seek Deep Root, which to them is a powerful hallucinogen, a sacred plant that grows in sacred sites.

The Glass Seer is a hollow crystalline bust of an androgynous, possibly inhuman figure, found at the mouth of the oracular cave at the top of Mount Fevetch. Anyone who sits inside of the bust and gazes at the stars as they turn above from dusk to dawn may truthfully, if cryptically, answer one question put to them. Each successive meditation within the Seer yields deeper insights – and escalating danger of madness as cosmic truths threaten to overwhelm the user’s mortal mind.

I hope these are interesting, or that you can find something to your own tastes in The Forge!

I love the written word more than anything else I've had the chance to work with. I'm back in the States from Japan for grad school, but still studying Japanese with the hope of becoming a translator -- or writer, or even teacher -- as long as it's something language-related.
View all posts by Confanity →
This entry was posted in Miscellaneous, Nonfiction, World-Building. Bookmark the permalink.