A Flight of Words (a most podern tale)

Today I went out on the balcony just in time to see a hundred small black birds wheel through the sky above me like a living constellation. The sky struck me as being incredibly blue. Not that it really was, mind you – it was mostly clouded over, the sort of cloud cover with gaps through which visible rays of sunlight jut down and poke the Earth like a child trying to get its mother’s attention. It’s the kind of sky that’s mostly gray, but that gives you a strong impression of soft but pervasive blues and yellows. And against that phantom blue, which probably only I could see of all the people who might be looking out over the bay at such a moment, the fluid fractal of a hundred living black stars iterated, weaving together in space.

I know that there were a hundred of them exactly. This sort of thing happens to me at times. I’ll be busy busy busy all day, not really seeing anything outside of the HUD up in my head, which only gives me something like a wire-frame model (in green on black, like those old computer games) view of reality, when suddenly I’ll have a moment to myself and look around and see everything with a clarity that would stretch the boundaries of credulity if I weren’t mostly accustomed by now to this sort of episode occurring every now and then, especially when I’ve been stressed, which always seems to have the effect of compressing my senses, forcing them back deep into my head with an inexorable pressure, until finally I shift my angle of relation to the world just slightly, just enough to find the weak point in that encroaching shell of pressure, which I think of as external but which probably comes from within me as well, or rather, from the nature of the previous facing and angle at which I’d been meeting the world, that angle which by shifting just slightly allows my senses to expand almost beyond all credulity and take in what seems like the entire universe, or at least all of it that matters to us here on Earth and our ionosphere buzzing with radio and television shows, for a few moments as the pressure is released. I call that moment of release “aspara” because I imagine that if I were synaesthetic it would taste like asparagus. And it sort of sounds like Latin, which even these days carries a little extra gravity and depth.

Anyway, with the depth of aspara pulling my senses wide open, almost beyond all credulity, I knew that there were exactly one hundred birds: forty-two males and fifty-six or –seven females. I could have told you the exact number of feathers each had, too, or the name of each in the prelapsarian tongue to which they would have answered had anyone still been capable of speaking it. But I really didn’t care that much. They were pretty – no, they were so beautiful I’m still surprised my eyes didn’t start bleeding right on the spot – but I’ve never really cared that much about birds. They look nice; some make nice sounds; some poop on your laundry as it hangs out to dry, so that you need to wash it and hang it out again. I guess feeding them can alleviate some of the “guilt of affluence” we feel in our “developed” societies, as if watching a sparrow peck at a hunk of suet somehow stands in for actually shipping the hundreds of extra calories each of us consumes in a day to some starving child in the Third World. My vicarious benevolence feels more at home feeding the carp in ornamental gardens. That’s just my hang-up, I guess.

At that moment, though, it wasn’t just the birds that I couldn’t bring myself to care about. It was everything and anything else that might have the remotest hint of sentience. It was especially all the people who would never bother to look out at the mechanism of birds stirring the blue-yellow-gray sky over the sun-poked bay. It was also all the people who might look but be unable to condense and relax themselves in a moment of aspara. It was even the few other people who might feel the exact same aspara but not the exact same alienation; just then I wanted to wage sectarian war against those last few for betraying that moment, for turning aside at the last instant from the fullness of emotional disjunction I had achieved.

When you added all those groups up, it ruled out pretty much everybody, I think. Because it was alienation that I felt, an alienation so fierce and sudden and vast and unexpected (since during aspara one would usually become immersed in the world around, even to the point of risking losing one’s identity for a while, I suspect) that all the sphincter muscles in my body involuntarily clenched tighter than they ever had before. So tight I thought I wouldn’t be able to take a dump for a week. Had I been a bird, constellating and iterating and stirring the sky with my ninety-nine small black companions, I wouldn’t have been able poop no matter how much suet I pecked or how many clotheslines I flew over. But I wasn’t a bird. I wasn’t even human. I was the empty bubble hanging in the water, the bubble of steam that might look like air but is really just hyperexpanded water. I was the bird that wasn’t there.

Then I was struck by a strange thought. There are more than six billion people in the world, so even if someone like me was only one in a billion, there must have been a handful of other people like that – other birds that weren’t there – maybe slightly more than a handful, or a handful on one of those six-fingered people like the man who killed Inigo Montoya’s father; just such a handful of other people like me in the world at that very moment. What if I used my senses, expanded almost beyond all credulity as they were, to look out and find them? What if they looked out at that moment too, at their own birds coruscating darkly in the sky over their own sun-bothered bays, and saw me? If we all saw each other, would we be able to join, to become unalienable through our mutual experience and visceral understanding of alienation? Since there are only six, or slightly more than six, of us in the whole world, we probably wouldn’t all share a language, but we wouldn’t need to speak. Just that shared moment of perfect aspara would be enough, maybe even enough that together we would rediscover the lost prelapsarian tongue the birds knew. Would I be free then? Would I then be able to excuse myself and take a dump?

But I was afraid to look. What if I looked and none of the others did? I’d never be able to recover. I’d be “like one that on a lonesome road doth walk in fear and dread, and having once turned round walks on, and turns no more his head; because he knows a frightful fiend doth close behind him tread.” Totally. Except I’d have looked at the whole world, instead of just behind me, and the fiend would have been my own alienation, seemingly moving in on me from all sides simultaneously but probably really just from within my own head. And there’s only so much alienation you can take before you start looking for aspara, sometimes in really unbelievably silly ways.

Then I was struck by the consideration that maybe the other people like me, grouped by the six- (or slightly more than six)-fingered hand of Fate, were looking while I alone held back. Or, what if all but one or two of us entertained the same doubt that I had, and those with the courage to look were insufficient in number to form a feeling of having been brought together by Mutant Fate, and the lack of that experience, or the experience of that lack, destroyed them? I resolved myself to look. I couldn’t bear the responsibility of crushing those other people, so like myself, as a result of my own cowardly hesitation. My sphincters tried to lock up more tightly yet as an expression of my determination, and I found that as a result, I couldn’t even breathe. I was overwhelmed by a moment of sheer animal panic.

Maybe that’s what did it. Or maybe the elastic of my consciousness simply snapped back to normal, as it does, in preparation for the next cycle. My aspara was over for the time being. I was afraid at first that I’d feel guilty, or that I’d fall into despair over my loss, having missed my chance at communion, but instead of hollow I felt… washed clean, I guess. Empty but open, like your gastrointestinal tract might feel after your sphincters experience a really intense moment of what I guess you could call aspara, an aspara of their own that we humans, confused by the demands for attention from all our other body parts, can’t readily comprehend.

For a little while I couldn’t even remember my name. Fortunately, it’s written on my library card, so I went inside and checked that. Then I took in my laundry, took out the trash, cooked and ate a simple but nice dinner, watched a movie, brushed my teeth, and went to bed. Not a bad way to spend a Monday afternoon. 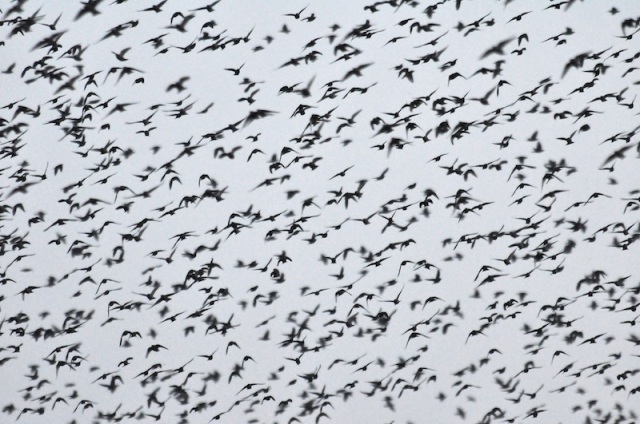 (From the files: a parody of postmodernism that I wrote one afternoon in Japan.)

I love the written word more than anything else I've had the chance to work with. I'm back in the States from Japan for grad school, but still studying Japanese with the hope of becoming a translator -- or writer, or even teacher -- as long as it's something language-related.
View all posts by Confanity →
This entry was posted in Short Fiction and tagged aspara, bay, birds. Bookmark the permalink.

1 Response to A Flight of Words (a most podern tale)