Beasts Forged for your Viewing Pleasure

A recent post by Noisms reminded me of The Forge, and of course I was inspired to go fiddle around myself for a while. So, just in time for Halloween, please enjoy these four monsters that probably fall somewhere on the spectrum between “terrifying” and “okay.” 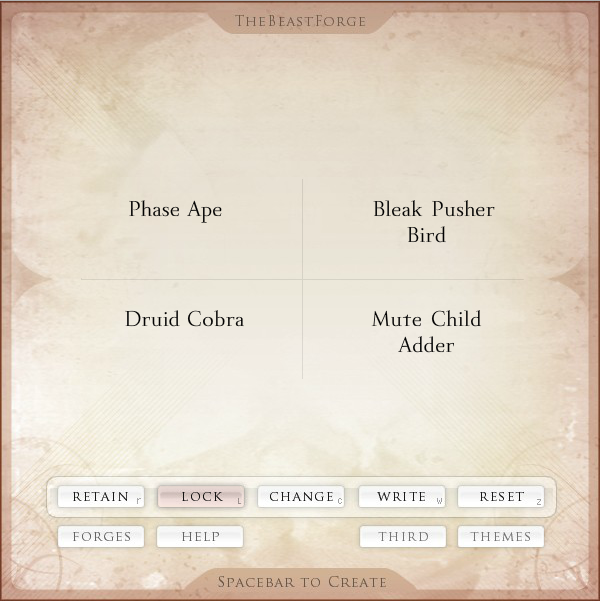 Phase Ape: A perfectly ordinary ape, with gray hair and iridescent eyes, except it can phase through ordinary matter at will. As a rule a Phase Ape is savvy enough to be effectively immune to physical attacks and to magical attacks that create physical effects (e.g. fire, lightning). It can only be hit (on a successful attack roll, as normal) when caught by surprise or if the attacker carefully matches their timing.

Bleak Pusher Bird: A perfectly ordinary raven, about as intelligent as any other corvid, capable of mimicking a handful of words of human speech, except it generates an aura of soul-crushing depression. The Bleak Pusher isn’t going to be any more hostile than any other 99% perfectly ordinary raven, but you still don’t want them around because taking almost any action is going to require a roll (saving throws of increasing severity, in D&D terms). It starts with the big stuff, but if you hang around within the bird’s range for a couple of days it starts to affect breathing, and then you’re in real trouble. You’ll likely be adventuring — Nevermore!

Druid Cobra: A perfectly ordinary cobra, except it can empathically command plants. They’re not intelligent by human standards; they don’t have language; they just desire that the local vegetation hides them from enemies and entangles their prey, and it does so to the best of its ability.

Mute Child Adder: A perfectly ordinary snake, just venomous enough to be a mild threat to a healthy adult, except it has the face of a human child. They don’t have human larynges, though, so they can’t really talk. As a rule they look pretty cute, sweet even, at least until they open their mouths and you see the teeth.

I love the written word more than anything else I've had the chance to work with. I'm back in the States from Japan for grad school, but still studying Japanese with the hope of becoming a translator -- or writer, or even teacher -- as long as it's something language-related.
View all posts by Confanity →
This entry was posted in Miscellaneous, World-Building and tagged Bleak Pusher, Druid Cobra, Forge, Mute Child, Phase Ape, snakes. Bookmark the permalink.