Alternately: Strict adherence to one’s principles and beliefs, or even to one’s chosen style in an art. Unwavering, uncompromising loyalty to an ideal.

Notes: Even though the meaning is similar, replacing 志操 with homophone 思想, “thought,” is considered an error. So is pronouncing 堅固 as kenko.

There are several other compounds that end in 堅固, all of roughly the same tenor as this, as well as a variety of synonyms using different terms. 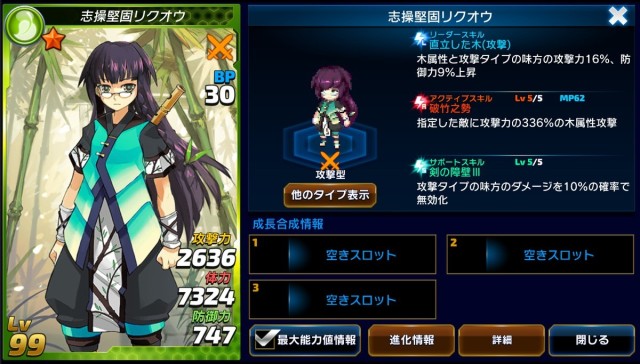 It bothers me that this is an attack-type unit instead of a defense-type. Source: a little dungeon-crawler game called トリックスター：召喚士になりたい.

I love the written word more than anything else I've had the chance to work with. I'm back in the States from Japan for grad school, but still studying Japanese with the hope of becoming a translator -- or writer, or even teacher -- as long as it's something language-related.
View all posts by Confanity →
This entry was posted in Japanese, Yojijukugo and tagged トリックスター, consistency, principle, RPG Trickster, 堅固, 志操. Bookmark the permalink.