Gently down the WOLF CRYPTIDS?!?!

Alternately: Confusion and commotion; getting freaked out and not knowing what to do.

Notes: This is another compound of compounds; both 周章 and 狼狽 on their own mean “panic,” “consternation.” The latter two in particular are interesting; they form an uncommon but acceptable kanji rendition of the verb urotaeru (狼狽える), “to be flustered,” “to lose one’s presence of mind.”

But beyond that, they supposedly represent a pair of cryptids: the 狼 has very short hind legs, and the 狽 has very short front legs. When together they can support each other, but when separated each can barely walk on its own. Nevertheless, in contemporary Japanese, 狼 is almost always used to refer to a regular real-world wolf, while 狽 has fallen out of usage entirely.

Replacing 狽 with 敗 (hai, which in compounds can be voiced as bai), “failure,” is considered an error. 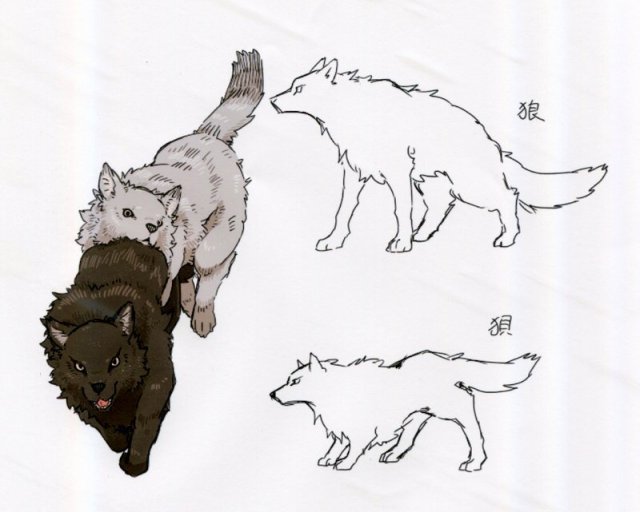 I love the written word more than anything else I've had the chance to work with. I'm back in the States from Japan for grad school, but still studying Japanese with the hope of becoming a translator -- or writer, or even teacher -- as long as it's something language-related.
View all posts by Confanity →
This entry was posted in Japanese, Yojijukugo and tagged chaos, confusion, cryptozoology, 狼狽, hubbub, panic, wolf, 周章. Bookmark the permalink.