They do toil, and they do spin

Humans aren’t plants, it turns out; we just raise ‘em.

Alternately: Hard, steady work. To carry on with plain, painstaking, long-term labor. Elbows greased and noses to the grindstone. The image is of the farmers’ work that goes into producing each individual grain of rice that goes on to become someone’s food.

Notes: This phrase comes to us from the poetry of Tang-era politician-poet Li Shen (Japanese 李紳, Ri Shin). It is apparently a contraction (a yojijukugoification?) of the poetic line 粒粒皆辛苦. (The 皆 is probably pronounced mina in Japanese in this case.)

As usual, the doubled character 粒粒 may be replaced with the doubling mark, 粒々.

* In this case, “grain” refers to “a small piece of something,” e.g. a grain of sand or grain of rice, rather than cereals or legumes. 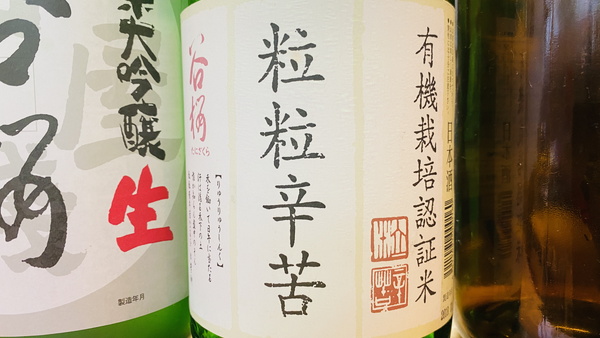 I’m starting to sense a pattern. If you’re at a loss for a name for your sake company, just use a 四字熟語.

I love the written word more than anything else I've had the chance to work with. I'm back in the States from Japan for grad school, but still studying Japanese with the hope of becoming a translator -- or writer, or even teacher -- as long as it's something language-related.
View all posts by Confanity →
This entry was posted in Japanese, Yojijukugo and tagged Chinese literature, 粒々, 粒粒, 辛苦, hard work, pastoral poetry, perseverance, rice farming, 憫農, 李紳. Bookmark the permalink.